They could reuse the audio for trumpbot and no one would tell the difference.

It's funny, we were just talking about this a couple of weeks ago while on the ride at Magic Kingdom. Times have definitely changed, in this case for the better. Disney does have some things in its past that certainly haven't aged well. I watched Peter Pan for the first time in decades with my kid a couple of years ago, and the racism and misogyny made me uncomfortable. We'll probably never see Song of The South again, though I wish I could just to compare what my adult self would think of it compared to my child self. (I suspect that Disney had no ill intent, but it would read completely tone deaf today.)

I enjoy the Peter Pan movie, but Tiger Lily & company always make me shift in my seat uncomfortably. (Likewise the "Indians" in Annie Get Your Gun.)

Song of the South is still available in overseas markets -- my ex bought the DVD in Tokyo -- so you might actually be able to buy one from an overseas website and compare and contrast.

Kudos to Disney for updating Pirates. Let me hit my Disney fanboy sites to see how many people are up in arms over the company ruining Walt's vision for the ride. They've only just recovered from Johnny Depp being added.... :-p

So a ride themed to violence and pillaging is going to be less offensive if they take out a scene where pirates bid in a bride.

There are no wench auctions in any of the movies...and all the kids riding these rides have grown up watching those movies. I don't think it will be missed, and it avoids future controversy.

It's a chance to plus up a ride and keep folks interested with something cool and new, while sunsetting a part of the ride that is undeniably iconic but also pretty icky (and it always has been, well before 2017). I'm all for it. I just hope the new stuff is super neat.

So it would be less sissy if we get a good laugh out of selling women as property? What a hoot!

Times change. To be frank, referring to a "sissy generation " says more about you than it does about the attraction and the Disney company's decision.

I agree times change. And by no means do I condone that. But it's history. Just like taking down confederation statues is ridiculous. Was slavery wrong. Of course. But it doesn't change history.

I tried to bite my tongue on this. Full disclosure - I'm the one that had no problem with the actor calling the girls "whores" at Halloween Horror Nights.

I couldn't find the right words because I'm in the "everyone is so offended by everything" camp and it makes no sense to be offended by a fictional portrayal of anything. Then I saw this posted elsewhere by one of the dudes from CoasterRadio and it captured it perfectly for me:

"Yes, I get that we should teach our sons and daughters to reject misogyny.... especially when world leaders display it on a regular basis.

But, this ride is set in a time period where pirates were nasty dudes and called women "wenches!"

Surely we're all enlightened enough to tell the difference between a theme park story set in the 1700's and how we all should behave in modern times, right?"

Unfortunately, I think the answer is no. No, we're not enlightened or mature enough to do that.

EDIT - let me add, that I don't think removing it harms the ride, really, or that this is the place to take a stand. It's a theme park ride, for Christ's sake. 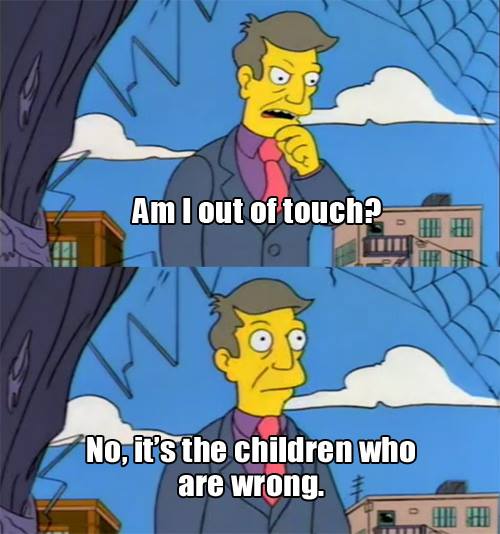 Yup, an entire generation of people is to blame. Got it.

Was slavery wrong. Of course. But it doesn't change history.

No, our history is ours. But there is an enormous difference between recognizing a shameful legacy in our past and CELEBRATING it. There's a critical difference between having a confederate flag in a museum and having a GIANT one flying over I-10 in North Florida...one tells a story, the other shows great pride in the racism.

There's a cute bit that will be lost. Isn't there a big, sweet looking gal just hoping to be picked? Then the "winner" is some little scrawny pirate who, in the scene around the bend, winds up being chased by her and the business end of a rolling pin?

Well, now that I think about it, that's probably not very correct these days either.

I'd hardly call that scene on the ride a celebration of misogyny. If anything, it further reaffirmed that the pirates are the bad guys. Also, what of the guy being dunked in the well during the interrogation? Shouldn't we get rid of that because it celebrates torture? I don't think it does in the same way that I don't think the auction was a celebration of any disreputable activity, but rather a reminder that pirates were actually pretty ruthless. I highly doubt it was done for anything beyond novelty, but I'm of the mindset that history is history and sometimes we need to be exposed to the darker parts of it so we aren't tempted to repeat it.

All that said, though, as Gonch said, this is an amusement park ride. I don't think it will really affect it one way or the other, but I find it ironic that people who are praising the removal of the auction are okay with the woman suddenly becoming a villain.

I don't think it will really affect it one way or the other, but I find it ironic that people who are praising the removal of the auction are okay with the woman suddenly becoming a villain.

I don't know about you but I'd rather be a free pirate than someone's property to be bought and sold.

I would too, but I think my point is that this is an amusement park ride and I think that the inevitable offense people have taken to this scene seems a bit over the top, especially when you factor in that there are countless other things pirates do, even on that ride, that should bother you just as much if you're the type of person to be bothered at all.

I suppose I just feel like if people are going to get offended over something like this, there are countless other things on the ride that should offend them as well (like the torture of the guy in the well), but somehow that's not a big deal.

Misogyny, slavery, and all that are wrong, and on that I wholeheartedly agree. I just never took the scene as something that glorified those activities, but rather something that just served as a nice reminder that maybe pirates aren't exactly the type of folks we should aspire to be. ;)