The issue was that the Vettel train actually ran better because it was lighter and had a shorter wheelbase than the NAD; it did a lot less damage to the ride. Unfortunately somebody (?) was not happy with its lack of locking lap bars, so they switched back over to the NAD.
When they ran the Vettel, it’s the only example I can think of where I got to ride a coaster with a classic train…then got to ride it later with a more-classic train!

I hope at least the trains do not end up being burned up as trash. NAD trains are getting fewer and farther between, and the Vettel's were truly unique. Having ridden both on the Blue Streak, I liked each one for different reasons. The Vettel train was definitely more retro feeling, but to me, the NAD train had a bit more padding on it. I know at one point there supposedly were two sets of Vettel train's there, one running and one being used for spare parts. Can't remember if there was ever a second NAD train on that coaster or not.

Just out of curiosity, are these the Vettel trains? This was taken in 2006, I believe. 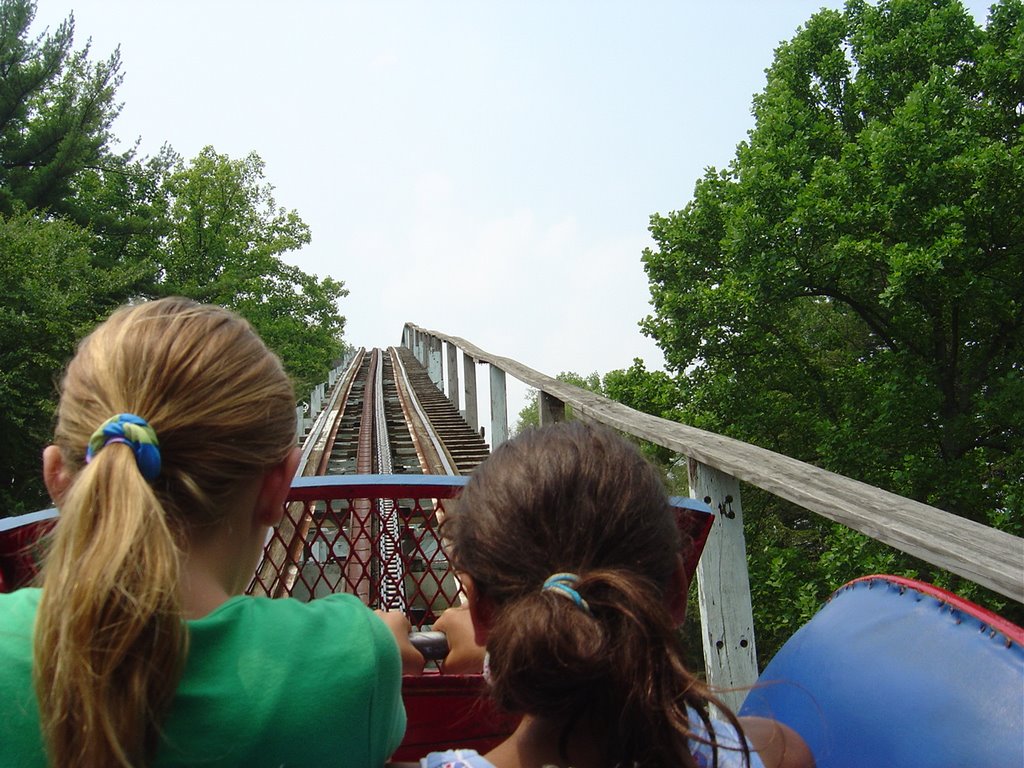 Yes - that's the Vettel train. There was a time they would go back and forth and run both in the same season, I believe.

I believe that’s similar to the train that still runs on Lakeside’s Cyclone, also a Vettel creation. (The last one now?)
And that was a highlight for me- I felt like I was sitting on a nice wide, comfy sofa when I rode that ride. I know I had a ridiculous smile on my face.

The Vettel train reminded me of Jack Rabbit at Kennywood. Roomy bench seating with very little actual restraint. Blue Streak also reminded me of riding Jack Rabbit, a nice pleasant jaunt up and down some hills. But then a few years later when I went and they had brought the NAD train back into service, man did it give the ride more than an extra punch.

The Jack Rabbit does run the Vettel trains, but it's not a Vettel coaster.

I think Lakeside might be the last one surviving.

Are there any Charlie Woods left in the world? It's a shame to see this go, and maybe it's not economically feasible in this time to deconstruct and reconstruct a wooden coaster at another park. But it has been done, and recently, at Six Flags Great America! It's such a shame that a piece of history went down that way...

There wasn't much left to save when the fire started. The person that bought the park obviously had no intention of running an amusement park. When the scorched earth has been cleaned up, you probably will see condos built along the lake selling for an exorbitant amount of money.

kpjb said:
The Jack Rabbit does run the Vettel trains, but it's not a Vettel coaster.

I think Lakeside might be the last one surviving.

Jack Rabbit’s trains are in-house reproductions (built with salvaged parts?), aren’t they? Or more like what PTC does when they overhaul a train…

The Lakeside trains are as far as I can tell totally unique. Oh, and from some photos and Internet discussion it seems that the Blue Streak (Vettel) cars had some odd quirks about them…like wheel carriers that didn’t quite line up on the left and right side…

Well, Jack Rabbit's trains were Vettels originally AFAIK. Not sure how much original is left, but you could say that about most wooden coasters and their trains, I'd suppose.