For more than 40 years, Carowinds has been the place where the Carolinas come together. It’s where the Tar Heel State and the Palmetto State meet. It’s where families and friends bond over thrilling rides and entertainment. Carowinds will now unite its storied history with its future as the standard for thrills by unleashing Fury 325, the world’s tallest and fastest giga coaster.

Fury 325 will simulate the wild, daring and spontaneous flight of the hornet. The new ride will be visible from uptown Charlotte, renewing the park’s skyline and serving as a symbol of changes to come. Fury 325 is part of a planned $50 million dollar multiyear investment to bring new life to founder Pat Hall’s original vision for Carowinds. The park will be revamped from top to bottom to celebrate Carolina culture including new rides and attractions, signature Carolina food offerings and entertainment. Opening in Spring 2015, Fury 325 will be the centerpiece of a new 8.2 acre main entrance plaza that includes a state–of–the–art ticketing and season pass processing area and expanded guest service facilities.

“Starting with Fury 325, we plan to make Carowinds a destination for thrillseekers to celebrate the Carolinas,” says Mike Fehnel, Carowinds Vice President and General Manager. “The new ride will build on the heritage of the park, creating new memories and traditions for our loyal fans and future guests from around the world.”

Riders will board into three 32–passenger open air trains and begin their ascent to the top of a 325–foot (over 30 stories) hill. This immense hill is followed by an exhilarating 81 degree first drop. Like an angry hornet chasing its target, Fury 325 will race through a series of hills, curves and quick transitions while reaching speeds of up to 95 miles per hour. Riders will speed along 6,602 feet of track during the nearly three and one half minute ride.

“The tradition of the park is so important to those who have grown up here,” says Fehnel. “It’s long overdue that we gave our fans a new energy surrounding Carowinds, which will build on our legacy as the premiere entertainment destination for generations of Carolinians.”

Those who can’t wait until Spring 2015 to experience Fury 325 can take a virtual ride at carowinds.com/fury325 where they can also check out photos, virtual renderings, ride stats and more. This Fall, fans can purchase a 2015 season pass or renew current season passes for the lowest price of the year at carowinds.com. Fury 325 is designed and manufactured by Bolliger and Mabillard (B&M) of Monthey, Switzerland, a recognized industry leader in roller coaster development and the same firm that brought Vortex to Carowinds in 1992, Afterburn in 1999, and The Intimidator™ in 2010.

Today the park host of the regional ace Winter warm-up event. I didn't get to go because I had other plans, but they announced a few new things this morning as well as unveiling part of the fury train. Also new for next year is a stage outside of Harmony Hall for a summer concert series. They're adding a new Coke Marketplace near fury. They're adding a new taste of the Carolinas festival. And they'll be open 2 weeks for spring break.

Thanks to Carowinds Connection for the info.

And what a nice rack it is.

Appropriate joke of the day: What kind of bees drink milk? lol

LK- No idea what kind of bees drink milk but I know what kind MAKE it! 😄 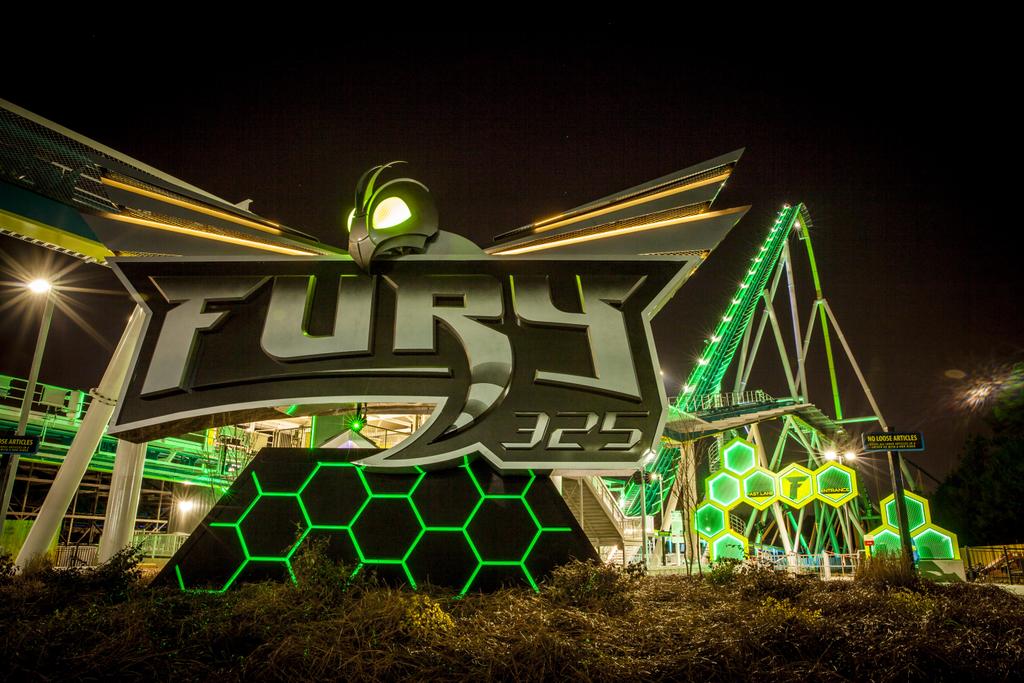 My FB feed is *filled* with Fury Fever.

Hope y'all have a fantastic time! Carowinds is now official and such...probably the new "second favorite" park in the chain. Take that, KBF! *wink*

Yeah, me too. I really should have made it a priority to get there tomorrow. The airfare out of MCO was nuts, and I couldn't commit to a solo 8-hour drive each way.

I've got one more month of pain in grad school, then hopefully I can spend some time this summer making up for the last few years of *really* slack coastering - new job makes it a little tougher, but UF is still UF (i.e., we don't pay, but since it's a university we're pretty lenient on attendance).

Fury has had my attention though, based primarily on the Leviathan reports. The fact that it's a 6-7 hour drive makes it a little more appealing...but not much. Probably get there in the Fall while FL is still muggy.

Jeff, I doubt it would fit your schedule, but there is a low cost carrier out of Concord to Sanford, but I think they only go certain days of the week. It's usually around $100 to $150 round trip.

I got numerous invites to Media day tomorrow, but i just got back from vacation, AND I think someone else at work is off tomorrow, but regardless, I couldn't get off to go, so, bummer. But I am going to the SP Preview after work on Friday. I CAN'T wait.

Yeah, the low-cost carriers (Allegiant flies out of Sanford) are a bit inflexible, and frankly terrible and up-charge for everything, so I'm mostly avoiding them unless they improve. I may still get up there next month... we'll see.

Those are the reasons I haven't used them. I don't mind paying for bags, especially flying to orlando, as I can fit a few outfits in my tiny bag or backpack, and have family pick me up now that my sister lives there, but the scheduling is turrible!

It's the lack of redundancy that concerns me. If you're in Sanford going to Cincinnati, and your flight is cancelled, it's not like they can put you on a Delta flight connecting through ATL. You're f'd at that point.

Allegiant is coming into Akron-Canton starting in May to Myrtle Beach, Savannah and St. Petersburg. They really do look like a cheap carrier.