The last time I was in southern California was December of 2012. I was on a week’s vacation to Las Vegas and decided to drive out for a day to spend the morning at Knott’s Berry Farm theme park, and the afternoon at Six Flags Magic Mountain theme park to get some roller coasters in. Previously, I’d spent time there in 2005, mostly doing theme parks then as well. This trip was initially planned for spring of 2015, but because of my onset of medical problems, it got pushed back to September instead. Which is fine, this was a great time to go.

We flew out Saturday morning from Greenville, SC’s small airport. I like smaller airports because it’s just easier to park, get thru security, get a bite to eat, and relax before the flight. Plus it was cheaper, and Southwest is way better than I felt it used to be, so score there. Our flight was around 10:30 with a 2-hour layover at ATL. 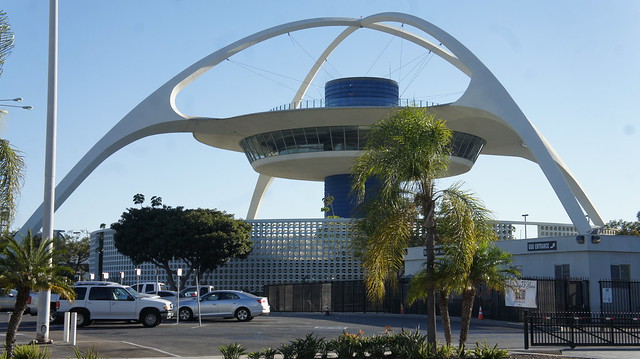 Getting to LAX and out to our rental car agency was pretty easy, and the trip to the rental wasn’t nearly as long as when I did this 11 years ago (it seemed like Enterprise was a good 30 minutes away from the airport if I recall correctly). We ended up in a cute VW Bug. Which excited me…until we started driving it. It had great gas mileage, but that was about it. I didn’t like how there were not accommodating handles on the door when you were trying to open or shut it, and you couldn’t lay the seats back. It’s just not for me. This is actually the first time I’ve ever driven a VW Bug. And I really didn’t like it. Neither did my travel partner.

So we headed from Budget (which didn’t take long at all, their employees were very quick and efficient) to our first stop in LA. Isaac had looked up best places to eat near LAX, and a great little place called the Humble Potato was right around the corner, so we headed there. Humble Potato was a burger joint that focused on Asian Fusion burgers (or Baga, as they spelled and pronounced it). I got the Curry burger, and it was fantastic.

I Hotwired a hotel close, which ended up being a Ramada. It wasn’t the best decision, but on a Saturday nite, we couldn’t really find anything with a vacancy that wasn’t really disgusting. The couple of places we wanted to do were booked. I’m bad for Hotwiring rooms at nice places the nite of unless it is a holiday weekend or special event. I guess SoCal is different than most places because I rarely have any issues getting a nice room. Thankfully it was only for one nite. Unfortunately, it was a really bad nite…

But before we spent much time at the Hotel, Isaac and I went out on the town. We went shopping in WeHo. I found a shirt I wanted, but the store closed before I got back to it. I found a hat I wanted, but it was too expensive, and I’m just not paying $50 for a hat. Especially one that I’m not wearing very much. We had a drink at a local bar and then headed back to the hotel room for our nite of no fun. Unfortunately, there was a very, VERY loud wedding across the street that the police were called on several times, and it never stopped. Add to the fact that Isaac was not feeling well, and neither of us got much sleep. 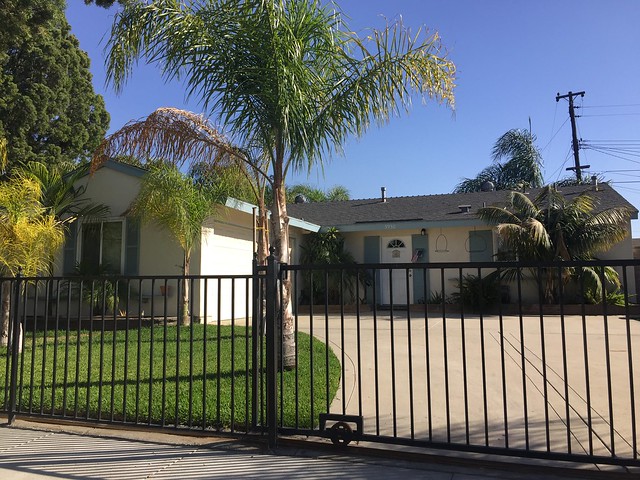 We woke up fairly early as Sunday was a fresh new day, so we got up, got ready, checked out, and headed towards Buena Park, where we would be staying the rest of the week. We headed to Knott’s Berry Farm for a few hours. It was busy, for a Sunday, but Isaac was feeling better, and he had been excited to get to the park. Obviously, I was willing to go, because I really love Knott’s Berry Farm. After getting in the park, we headed to Ghostrider first. It had a decently sized line and immediately broke down. With new work on it and new trains, I wanted to ride it, as it is one of my favorite wooden coasters, but there was no reason to wait that long, especially since we were staying right down the street with Platinum Passes. 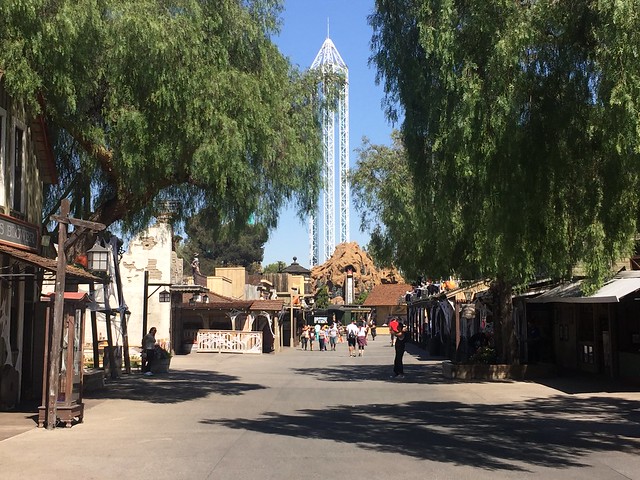 So we walked thru Ghost Town. I hate that Ghost Town Alive ended just prior to our arrival, I’d have loved to have seen it. Our first ride of the day was Calico Mine Ride, which I’d not been on since it’s renovation. I love dark rides, and the refurb on this was really well done. My favorite scene is the large ‘glory hole’ room in the middle because it’s rather massive for a park of this size. 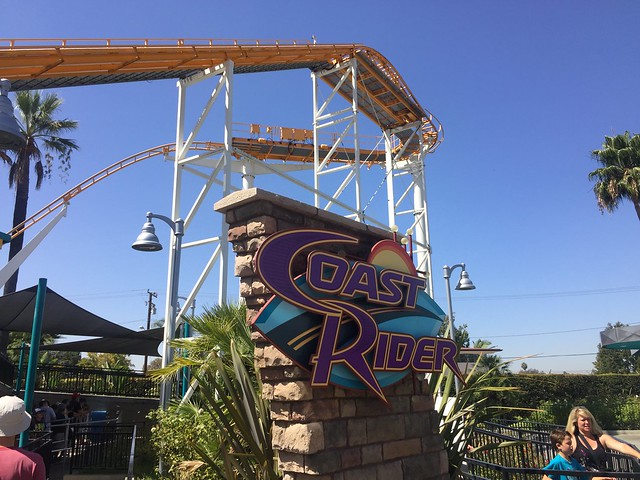 Next up it was time for a new credit. Normally, I’d do a rundown, but Coast Rider, the park’s newer Mack Wild Mouse (large park model), which I’ve ridden several times, including earlier this year, at King’s Dominion, not far from me. It’s a fun mouse, with a great first drop, and it looks great where they put it at Knott’s. Plus, I like the play on Ghostrider with the name. It’s a much better ride than what used to be here. Up next we headed over to Xcelerator, which didn’t have much of a wait, surprisingly. 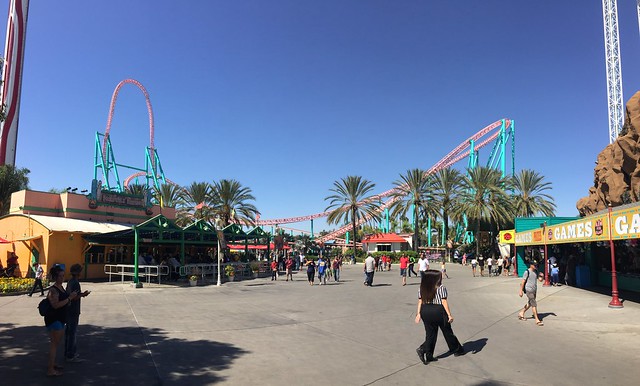 Xcelerator-I still don’t care much for the queue in the station. Not sure why they decided to group by car, it doesn’t always work. We sat near the back. During the offseason, they were running one train, but in all three visits to the park on this trip, that was plenty. This is one of my favorite launched coasters. Even with a short track length, the launch is really powerful, with great airtime over the top. I greyed out in the 2 turns. It was bliss.

We walked thru the Fiesta Village area and planned to ride Montezooma’s Revenge, but decided we needed water and a bathroom break first. We headed thru Camp Snoopy and back over to Ghost Town. We toyed with doing the Mystery Lodge but decided to keep it for another day. I got some Boysenberry goodness in the form of an Icee, and it was delicious. Then we hit up another amazing dark ride that I wasn’t able to ride last time, and haven’t been on since it’s refurb, Timber Mountain Log Ride. Again, another amazing refurbishment. I don't’ remember a lot about the ride before, but we didn’t mind that we waited in line because again, it was just so well done. Then we headed around, at some point hitting up Silver Bullet.

Silver Bullet-This is one of my favorite inverted coasters. Most people don’t like it, I think it’s underrated. I like the rampy first drop that most don’t. Also, the ‘Stengle Dive’-esq turn is really very awesome. The ride is very well paced, and then you hit that very intense helix at the end. I wish it were closer because I love me some Silver Bulle

We headed back around the park again and ended up getting in line for something else that was new since my last visit. And if this is any indication of what Cedar Fair can do with new dark rides, I want one at every park, including Carowinds, asap.

Untitled by C. E. Beavers, on FlickrVoyage to the Iron Reef-The queue is nicely done. I felt it was on the level of at least a Busch park if not nearly Universal. And the whole ride is just fantastic. The gun I had was slightly off, but it worked, and the scenes where you’re shooting were a lot of fun. I also liked the throwback to the older rides no longer at the park. I really liked it. I want a Pirate themed one at Carowinds, please…

Voyage to the Iron Reef-The queue is nicely done. I felt it was on the level of at least a Busch park if not nearly Universal. And the whole ride is just fantastic. The gun I had was slightly off, but it worked, and the scenes where you’re shooting were a lot of fun. I also liked the throwback to the older rides no longer at the park. I really liked it. I want a Pirate themed one at Carowinds, please…

We rode Calico Mine Train one more time, and then we left the park as it was nearing time for us to go check into our amazing AirBnB house a mile and a half away. Once we arrived, we checked it all out, checked out the pool, put our stuff away, and then headed to the grocery store to get some stuff for the week, finding an amazing authentic Korean restaurant along the way. Isaac loves Korean food, and I love what I’d have of it, but this made me wish I could have it more often. The food was amazing. For most of the dinner, we were the only non-Korean customers in the place, and it was fairly popular. 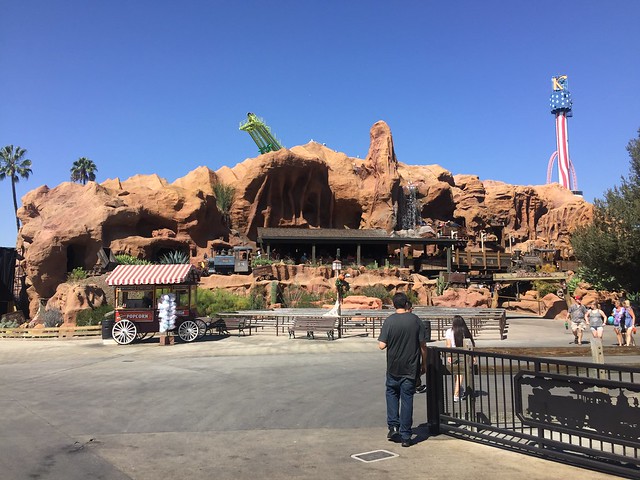 We headed back to the house, and I tried to get in the (now cold) pool but didn’t last long before heading to bed.

Indeed. (Hint: Photos contributed to CB are worth lots of points. https://coasterbuzz.com/Contribute/Photo)

I plan on that, actually. Still going thru and uploading from my last couple of trips. Gotta submit the best ones so I look like I know what I'm doing ;-).