Bring back of a classic coaster 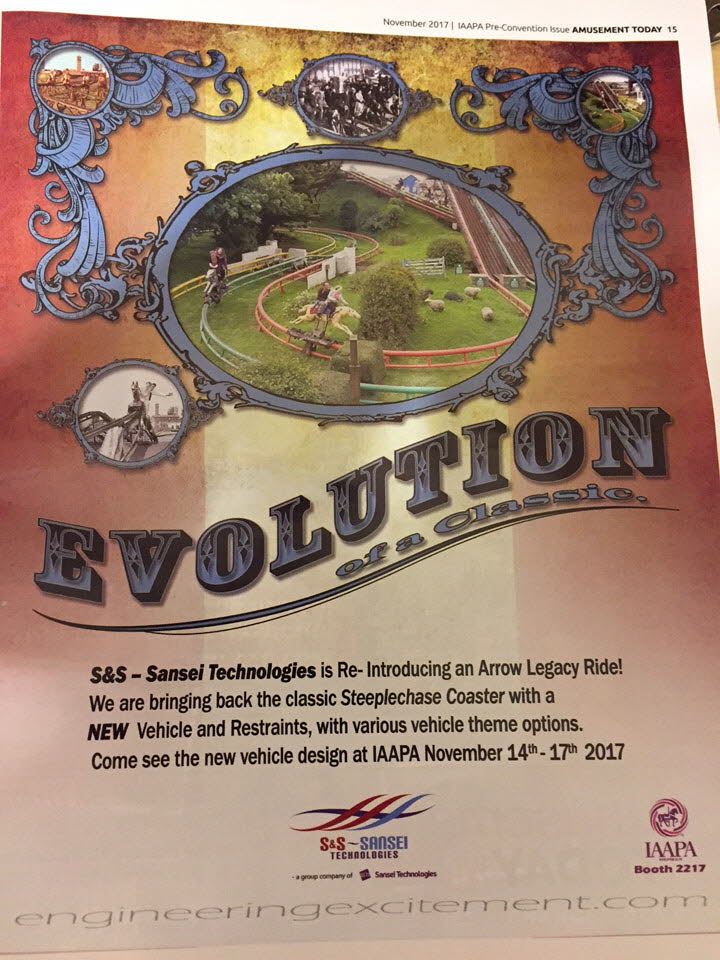 rumors are that Knotts maybe is intrested to bring back a coaster they had in the past, the soap box-derby-racer.

I have riding the one on the photo on several occasions, of course not a thrill-coaster but a really nice funcoaster .. onride video

What do you think of a possible new incarnation of such a ride?

I’d be all for it. Knott’s Soapbox Derby Ride was a ton of fun. Nothing in the thrill department, but I really liked it anyway and rode it several times that day I was there.
I look at pictures and rare clips of Steeplechase park and the original ride was so strange. It encircled the building, seemed to be rather fast, and riders straddled horses with nothing to keep them from tumbling off. Things now are sure different from the “at your own risk” days of amusement parks. This modern version will likely have a version of the back restrains like Pony Express or Disk’O, which aren't heinous.
I’ve always thought a drawback to these rides is the amount of real estate required for a ride of any length. We’ll see if anyone picks one up.

It was a fun ride, but Arrow is gone so they won get it back. (unless they stored it in a storage place.)

Except the o.p. is referencing S&S who’s developed a re-take on the Steeplechase ride. And should Knott’s decide to pick one up they could order soapbox cars. Ponies would work well there, too, but they already have a horsie coaster.
Anyway, no need to dig through a storage place.

The novelty of the Pleasure Beach ride is being up on the horse, a good few feet above the track, so the turns are very much emphasised.

I wonder if the new vehicles will be more akin to Steeplechase/Cycle Chase or the Soap Box cars.

Good point. But they are getting hangtime so maybe in 2019?

Except the o.p. is referencing S&S who’s developed a re-take on the Steeplechase ride. And should Knott’s decide to pick one up they could order soapbox cars.

The part of Knott's is based on rumors, one never knows what is true or not. But we all know that S&S has aquired parts of Arrows ( or everything?) several years ago, so perhaps they are thinking a little bit sentimental now and think it is a good idea to develop further on that kind of technology?

sofar as I know the steeplechase in Blackpool is currently unique in the world, and it is lots of fun when 2 or even 3 tracks seem to race each other also the feeling of sitting that way in a rollercoaster is very nice.

They built a prototype at the factory. 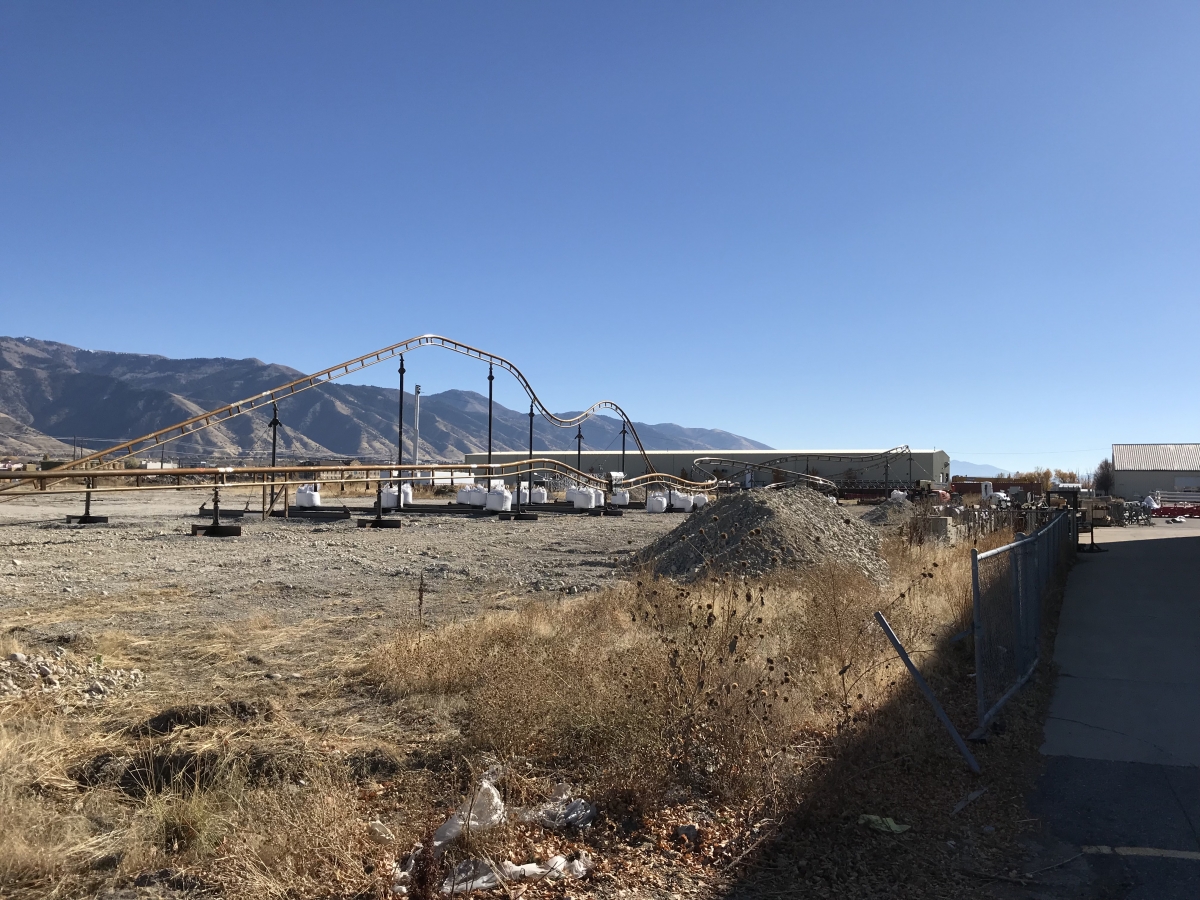 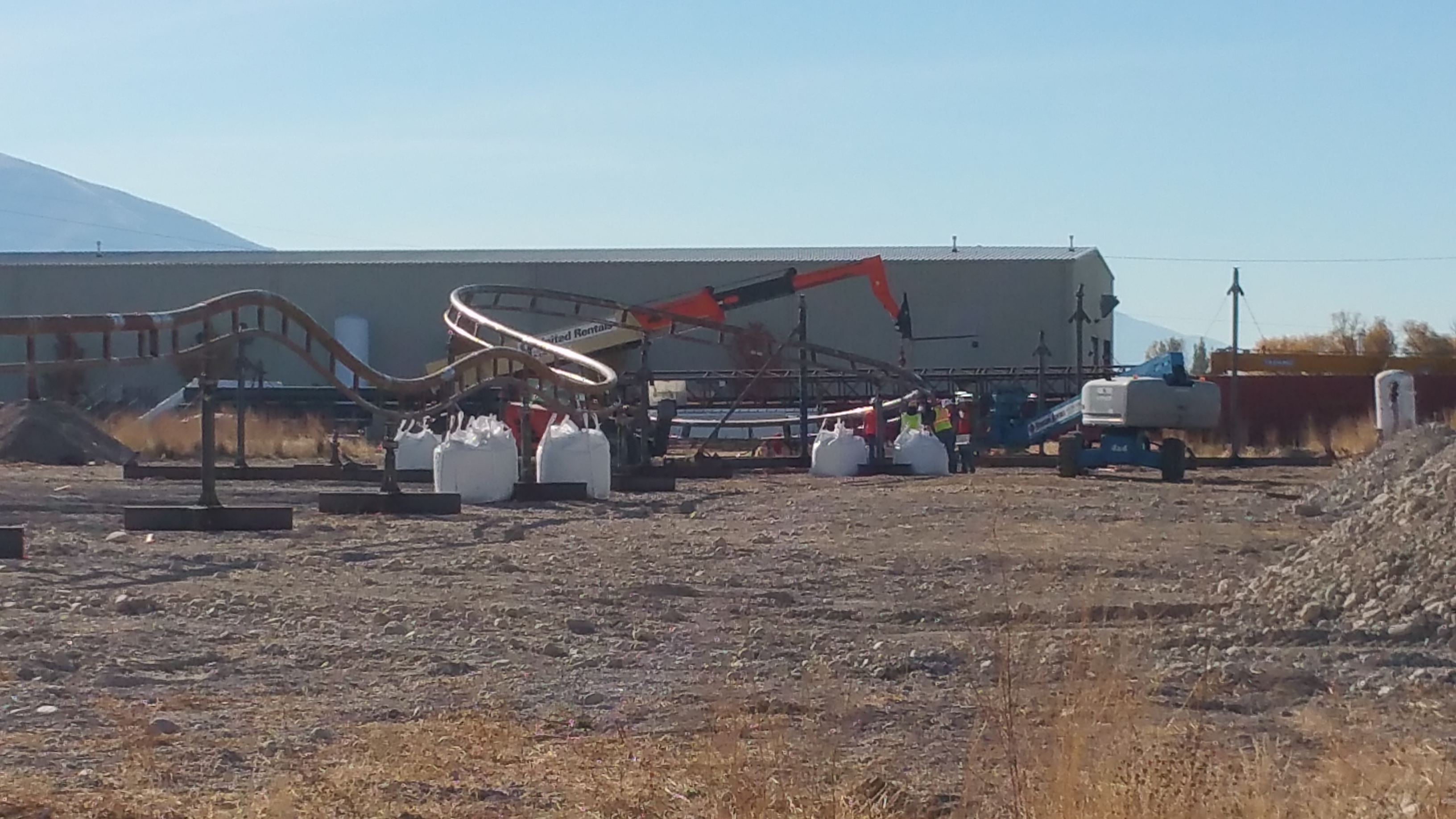 Much more banking then in the Steeplechase at Blackpool.. what will they suprise us with?

in no particular order:

1) S&S-Sansei should have all of the IP from the "Arrow" bankruptcy (no need to get into the actual legal names). Whether all of the old designs/plans/schematics/etc survived all the moves, who knows, but obviously they're working on a re-do of THEIR old Steeplechase version.

2) No reasonable expectation that Knott's would get this based on (as mentioned above) a) Hangtime for 2018; b) already have a pony themed coaster; c) said pony themed coaster looks, feels, and would in customers' minds, probably operate very similarly to what that prototype pic looks like; and d) Knott's, perhaps more than any other park, is overflowing with small to medium sized coasters (Coast Rider, Sierra Sidewinder, Pony Express, Jaguar, and Timberline Twister if you want to extend the analysis). If they didn't already have Pony Express, I would say yeah, I believe it. As is, I see it as a tough sell, for a park that is ostensibly short on space.

3) Honestly this looks someone making a run at a family version of RMC's single rail product. Given the picture, this prototype layout seems like more of a proof of concept, rather than a true steeplechase experience. That layout would be nearly impossible to incorporate any real "race" component. Not that that means anything, if this is just a true prototype

4) I had a most wonderful time on the WSR ride at Knott's when I had the chance to ride it. As mentioned above, not thrilling, but fun, high capacity (or so it seemed at the time). Always wondered why something similar wasn't resurrected before now. (honestly, the idea of slapping a hyrdo flume boat on the Steeplechase chassis was sort of inspired, as a retrofit).

In 20+ minutes a livefeed on Facebook tells use more

So they have several designs, the horses look brilliant... the restraint is over the hips, and from 42 inches allowed to ride.

An other design is a dynasour.

He mentioned it being a racingtrack, where the track is one loop, mobiustrack such you ride both side in one ride. 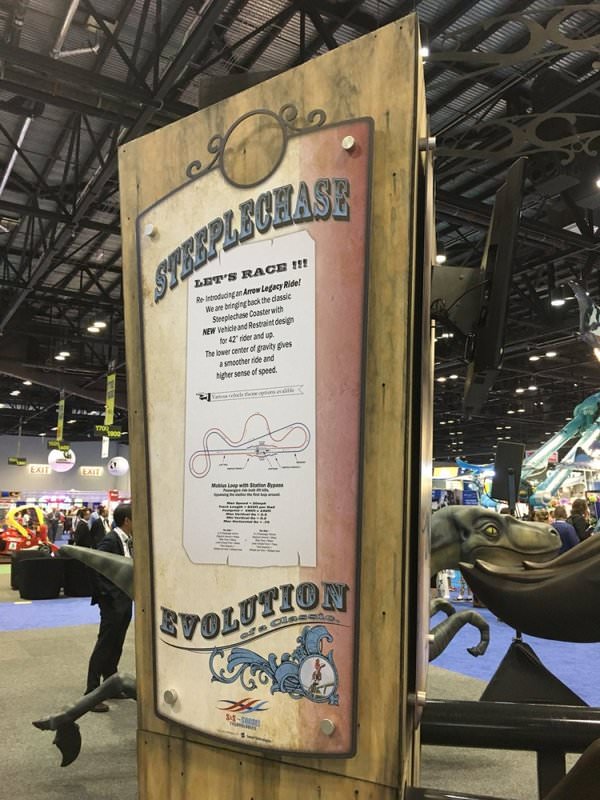 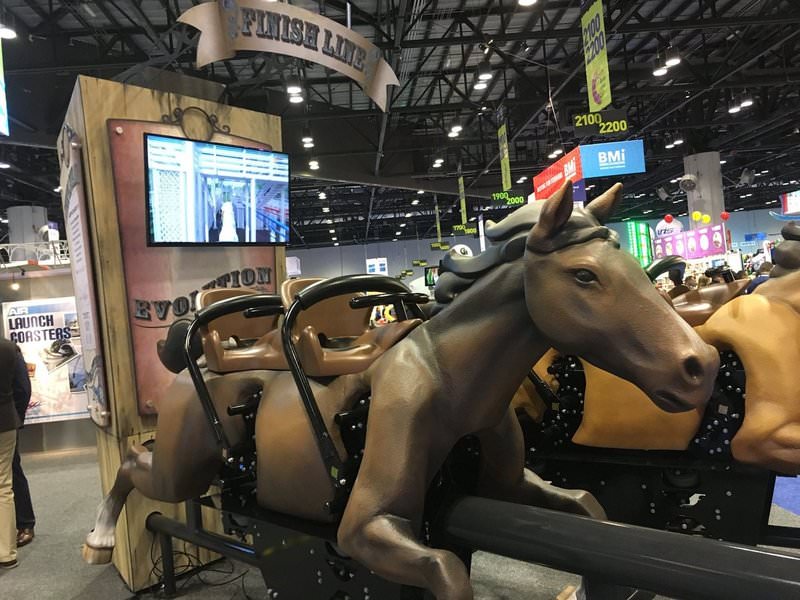 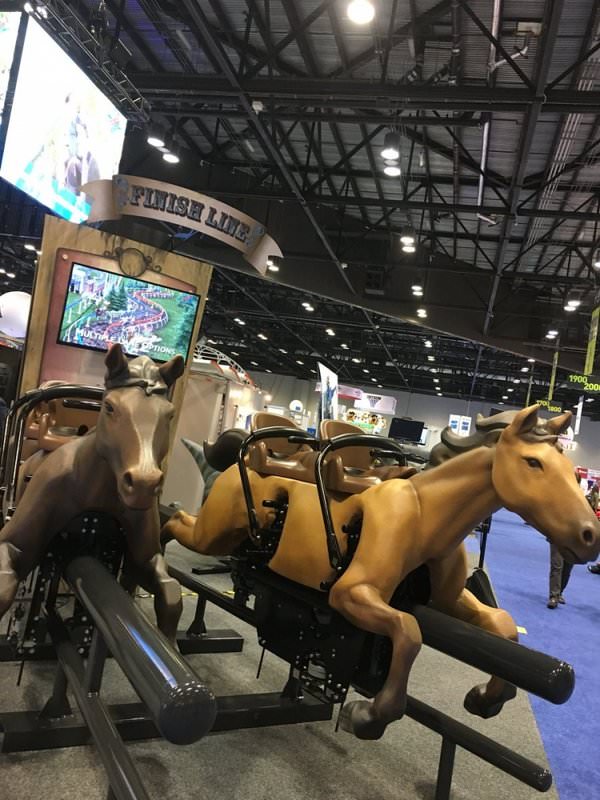 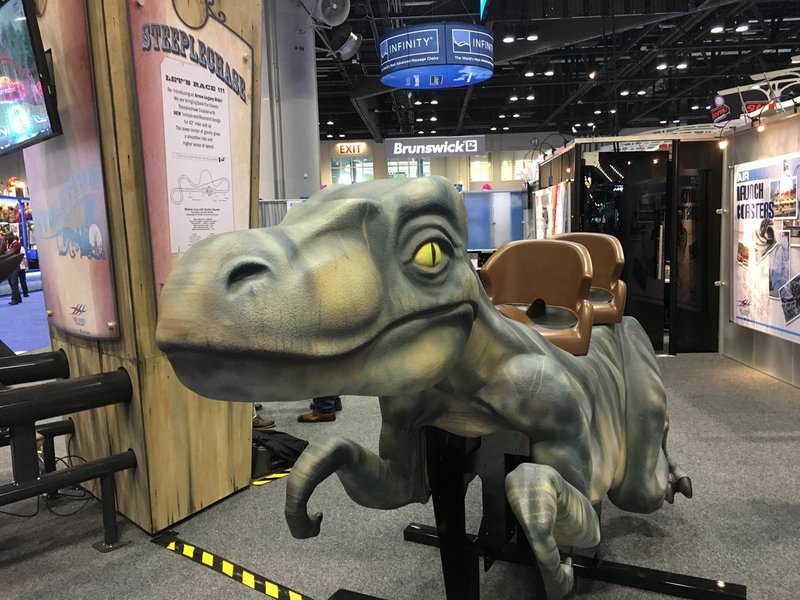 I think it looks like a promising concept, let's hope it gets sold soon.. 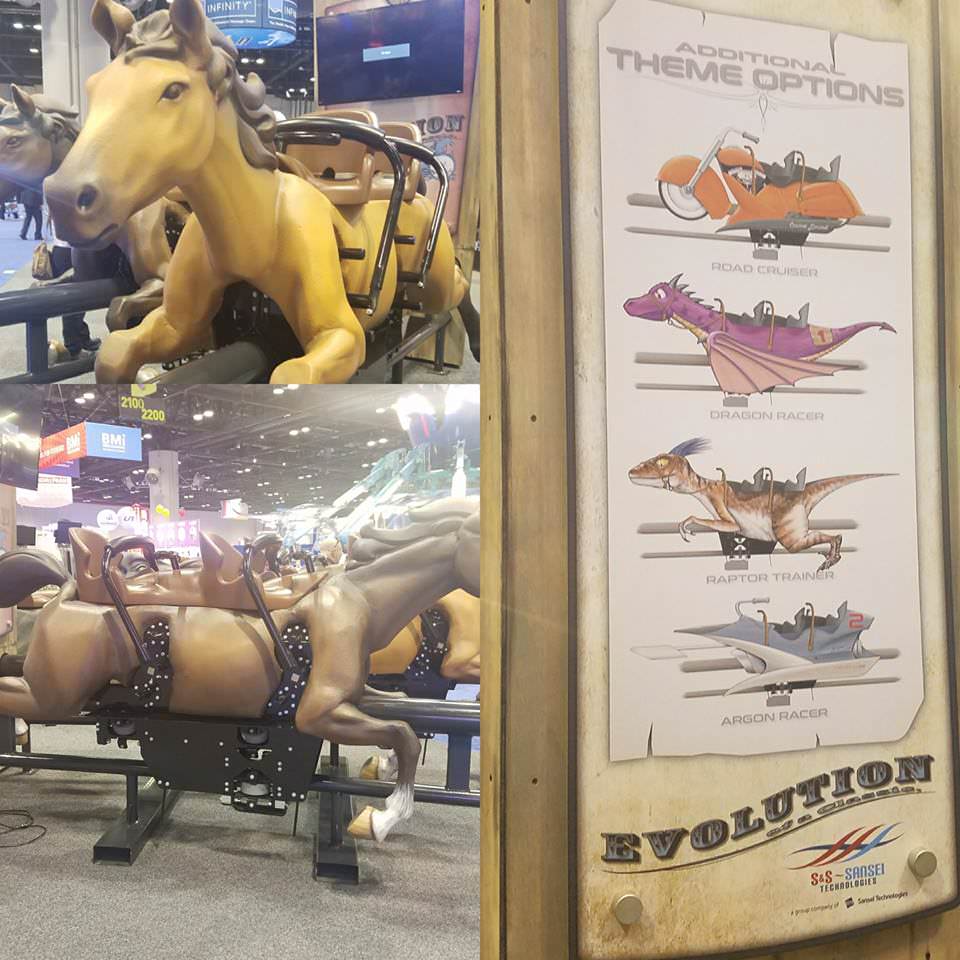 No Soapboxracers? But these look cool too.

I’m really excited about this. The WSBR at Knott’s was one of my favorite rides, growing up. I’m just having some difficulty seeing how/where anyone’s legs will fit with those lapbars. Will our legs go straight out? LOL