I rode Diamondback yesterday, with seatbelts, and I'm here to dispel any fears.

It wasn't bad at all. The first thing I noticed was a disclaimer, which was kind of odd. At the very front, where you enter, the greeter informed each and every group that seatbelts had been installed on the ride. Almost like a little warning in advance. In the station, the person on the mic stated several times that seatbelts are now required. Something like "Welcome oncoming Diamondback riders! The ride now has seatbelts, so please fasten your belt around you before you pull your lap bar down". That would be in an obvious effort to avoid delays in loading, and it seemed to work. I noticed no difference in load time or dispatch intervals- everything seemed to run just as it had in past seasons. The bigger delay was caused in having to stand kids up and out of the train to measure them, another important safety measure.

About the belts themselves: The belts are attached to the metal underside part of the chair and there's a rigid sleeve that keeps the belt from flopping around. That thing also keeps the belt kind of high on the rider. The belts retract, and when I fastened mine I was relieved to notice that it sat in such a position that it wasn't uncomfortable at all. In fact once my lap bar was down I could barely feel it. The other nice thing is that they buckle toward the middle, not way down on the side like the PTC trains they have there. And due to the fact that they automatically retract, the op wastes no time buckling up vacant seats.

For me, at least, the seatbelts in no way detracted from the ride. If Diamondback had to get belts, these are the ones to have.

I wasnt too concerned that they would detract from the ride, just feel that it's all unnecessary.

But thanks for the update.

These seat belts DID add about 20-25 seconds load time to the ride, per train. This sucks. It didn't take away anything from the ride experience, though. It feels as if it wasn't there.

I loved Banshee, and its an amazing and forceful ride... however, Diamondback continues to rule the park in my book. The lines were about 30 minutes long each ride (Banshee, The Beast, Diamondback, Firehawk and Flight of Fear) last Friday 4 pm to 10 pm so we got only 7 rides total... which isn't too great but we had fun. 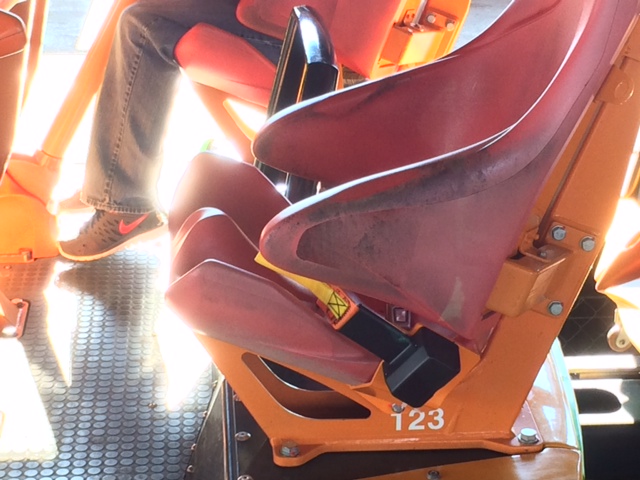 Oh, I don't know. 25 -30 seconds per ride can and does happen for a variety of reasons. And I observed that those same reasons continued to pop up while seat belts were being checked, which happened at the exact same times lap bars were checked. I have no idea how you determined that amount of delay per ride was happening on account of these belts.

I was there that same Friday night, there was a line down the steps and under the lift when I went through there, and our loading process went without a hitch. After my ride our train was stopped on the final brake before the station and the third train stacked behind us because they had to re-measure a kid before they could release the train ahead of us. It added, maybe, 45 - 50 seconds to the cycle but it didn't suck. It happens.

To eliminate delay on that platform they should get rid of those bins. And if you want a delay-fest, just look at Firehawk. It's without a doubt the worst offender there as far as capacity goes.

I did a final lap of the park at about 9:45. The Beast had about 40 minutes, DB had 2 lines formed in the upper queue house, so I got some Graeters and walked over to Banshee expecting the worst and no more rides. I got in line at 9:53 and was on the second to the last train at 10:08. That night time ride in the front row was fast, intense, and thrilling.

Btw, I would recommend spring Friday evenings to anyone who can get there. (I got hip to it as a good time to go the year Diamondback opened). The park was dead empty at 4 and stayed that way for a couple hours. Even when it picked up, after school and work let out, it wasn't bad. All together I took 15 various rides, saw the dinos (first time, probably never again, but thanks for the free get-in) and sat down for two season-dining-plan meals. Oh, I also people watched and smoked a couple of cigs.

On the way down from Columbus I stopped at Miami Valley Racino in Lebanon and walked out with 800 bucks in my pocket. Then I drove down 75 to Mason and visited EnterTrainment Junction, the worlds largest model train exhibit. I love trains and miniatures and have always wanted to go there. AND they have a great scale model of old Coney Island there, complete with working rides. Awesome.

All in all it was a great day, in spite of those silly seatbelts.

So bizarre, especially when you consider that they took the seat belts off of The Bat and Backlot Stunt Coaster last year after adding them years after those rides were put in. So maybe in a few years they will randomly decide to remove them again, and maybe the raise height requirement a couple inches for no real reason.

I thought it was originally discussed that the B&M restraints on Diamondback had some sort of backup system built it which satisfied the CF requirement for having a backup system in place.

Edit: It would seem that the other B&M hypers at CF parks have had the belts added too. (Behemoth, Intimidator)

I was at Carowinds this past weekend and belts were added to Intimidator as well. I also heard they were installed on Behemoth. I don't think they affected my ride on Timmy at all. Plus the enthusiastic crew seemed to be dispatching at the same pace as always. The all day long full queue this past Saturday was usually about an hour wait.