I recently came across an old photo of a roller coaster that once operated at Alameda Park in Butler, PA. I'm not interested in historical stuff much, but this caught my attention because I was born and raised in little ol' Butler.

I knew there was some history there as the picnic pavillion used to house a carousel, but beyond that Alameda Park was just one of the public parks in town.

After I found the coaster photo I did a bunch of googling and it turns out there's not a whole hell of a lot of info available about Alameda Park and even less about the coaster that operated there.

I did find a Butler Eagle article dated May 22, 2012 talking about the park and a local historian who was going to be presenting a slideshow about it. I wish I had dug all of this up earlier because we were just there 3 weeks ago. I would have made a point to nose around a bit with the camera.

At any rate, not sure if I'm looking for more info or just wanting to share, but I combined the article and photo I found into one graphic for anyone who might be interested. Some decent info on a park/coaster that no one seems to know much about.

Interesting that RCDB has no info on the place, but I guess there are a ton of coasters from that era unaccounted for. Looks like it might have been a side friction coaster.

Information on those kinds of coasters can be very difficult if not completely impossible to come by. I've been trying to find info on a coaster that was in one of the city parks in Mansfield, OH where I grew up for quite a while with no luck. My mom vaguely remembers it and thinks she may have ridden it, and that it was in North (Lake?) Park, and that there might have been one in Central Park downtown as well. She's told me stories about the one at Meyer's Lake and I'm pretty sure she also visited Idora and Euclid as well. I just wish I could find out about the one or two that were in Mansfield.

I grew up in the Gibsonia area, about 20 minutes south of Gonch. I've spent a good bit of time at Alameda Park and never had a clue that a roller coaster had stood there. Cool bit of info, but might be hard to find out more about it.

I still have ties to the area and I'm only a half hour north, so I'll have to ask some of the older folks around about it. Might be a neat place to take the metal detectors.

There are likely thousands of coasters that have come and gone that we will never know anything about. In 1919 there were over 1,500 parks in the US alone. With some cities having as many as six. By 1935 only 400 remained. Many of them struggling to survive.

I have found info on a few different parks and coasters in the northern Ohio area and forwarded it to Duane to be added. He is grateful for all the help he can get as this is definitely more work than one person can handle.

RCDB started as a hobby for him. It's pretty impressive the vast amount of data he has compiled in a fairly short amount of time.

PS - You know your a Trekkie when you see the name Alameda and all you can think of is Star Trek IV: Can you tell me how to get to the Nuclear Wessel in Alameda?

This reminds me of when I was a teenager, and a relative in Altoona PA showed me a photo of a roller coaster (and amusement park) that was built where the Penn State satellite campus stands today in Juniata.

Oddly enough, almost a full year later I stumbled across a little bit more about the park. This time specifically the carousel and the fact that the horses from Alameda Park's carousel currently reside in Costa Mesa, CA.

Guarding the gateways in South Coast Plaza in Orange County, California, and mounted on the entrance signs, are eight hand-carved wooden horses. These animals were made for the Alameda Park carousel in Butler, Pennsylvania, in 1855, and were procured from a couple who had purchased the carousel and brought it from Pennsylvania to California. They had refurbished and erected the carousel and original melodian for the enjoyment of the neighborhood children, for whom the carousel operated on the weekends. 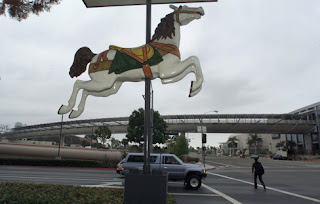 Where the H*ll is my Flash Pass?