A time for Vengeance...

If you can’t find a way to go to Cedar Point during dead week, Memorial Day Weekend has proven to be a great time to head to Cedar Point and find moderate attendance and lighter lines. In the past four years I’ve spent 3 Memorial Day weekends at the park, and have had a great time on each visit. Even with the long drive from North Carolina to Sandusky, the trip is worth it to visit America’s Roller Coast, and having followed the transformation of Mean Streak into Steel Vengeance over the last 2 years, I was determined to get to the park this year to ride. My friends Isaac and Blake joined in, and on Friday morning we headed north.

Isaac found a nice AirBnB about 30 minutes south of the park and, after stopping off there to drop off our stuff and freshen up, we made our way onto the peninsula. We parked in the Cedar Point Shores parking lot since the Magnum lot was closed, and headed in to meet up with Bryan Bird. After introductions and salutations, we walked towards Dragster, which was testing after being closed. The line opened as we walked by, so we quickly got into the queue as the wait wouldn’t be this short all weekend most likely. 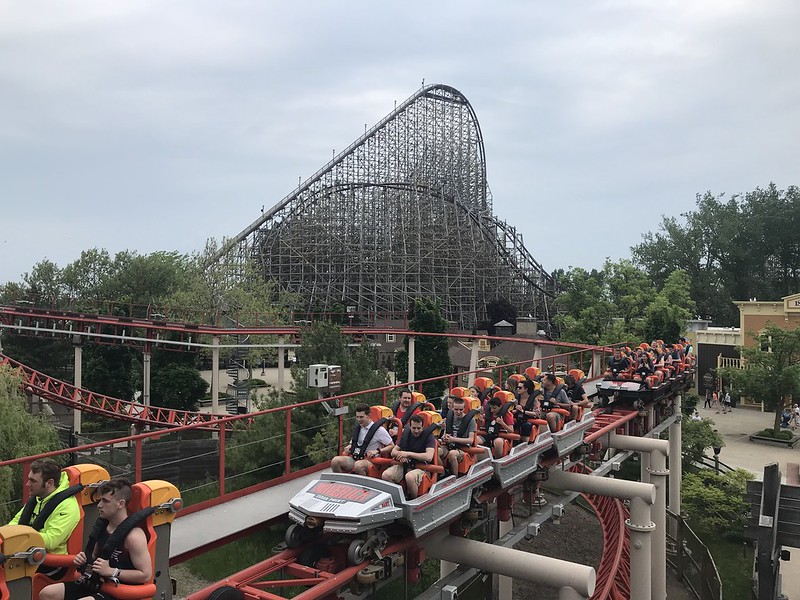 Dragster is always a great experience, even if it isn’t a great coaster. We waited about 35 minutes or so to ride near the back of the train. Dragster always makes me anxious because of that launch. This was Blake’s first time at the park and first time on anything like this. As always, the launch was super fast and intense and I really still like Dragster as a ride. This was our only ride all weekend because it was being cranky both days.

We walked around the front of the park and headed over towards Millennium Force. I noticed when driving by that the line started at the end of the ramp and was happy to see that was still the case. It only took about 30 minutes to get on the ride. I know the coaster gets a lot of ‘hate’, but I actually really like it. The first drop is already amazing and the setting can’t be beat. There is airtime on the two hills hopping back over from the island, and even the small hop by the station gives you a rise out of your seat. Blake once again loved it.

After that we headed across the midway to Rougarou, which was nearly a walk on, and we got on in the back. The ride packs a punch and is so much better than Mantis ever was. We walked around for a bit and thru Frontier Town. Steel Vengeance had a very long line, so we walked around the park and finally hit up the burger joint back near Steel Vengeance as Bryan said the food was good. And the food was decent. The customer service, however, was severely lacking. It took way too long and they kept messing up orders, but eventually we did get our burgers. After that we headed to the entrance to Steel Vengeance to get in line to end our nite. The wait was about an hour and twenty minutes with them running one train.

Steel Vengeance-I can’t even give a proper rundown of the ride. Its just as good as everyone said, no overhyping here. The first drop was amazing. We rode in the back seat. The 90 degree drop was amazing. After that you have the two outward banked ejector airtime hills. Then I can’t honestly tell you much about what happened because it was a big convoluted mess.Insanity.

So that was the end of the first evening.Once we got there we got our stuff together and I took a shower and quickly fell asleep.

The next morning we got up and got ready to head out.It really helps an already amazing ride. 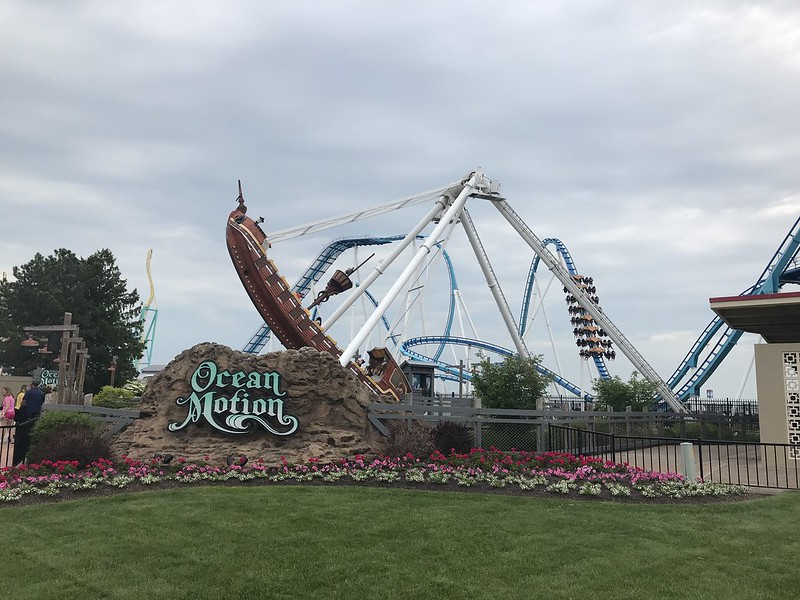 It was getting close to park opening so we headed up to Valravn thru Frontier Town, stopping by the closed petting zoo for a brief visit with some donkeys.This was my first daytime ride, and we rode in the front row this time.

Valravn-That first drop on any dive coaster is great.I really like the coaster more on a second go round.

As we were in the area we hit up Blue Streak, which was (and has been for some time now) running phenomenally along the track.I mentioned at some point that I wanted to ride Ocean Motion as I never had, and it has such a cute, quaint setting.

Though I'm still trying to get back down to my pre-surgery weight of 2015 (I’ve lost 20lbs since December!), I’m not skinny enough to ride Wicked Twister.But I didn’t want Isaac nor Blake to miss out, so after getting some Starbucks I told them to get in line while I sat and watched and had some coffee.

Since we were already in the area and close to Gatekeeper, that was what we got in line for next, which was basically a walk-on.After Gatekeeper I took Blake to see the top floor of the Coliseum, knowing that he’d love the big band era art deco. 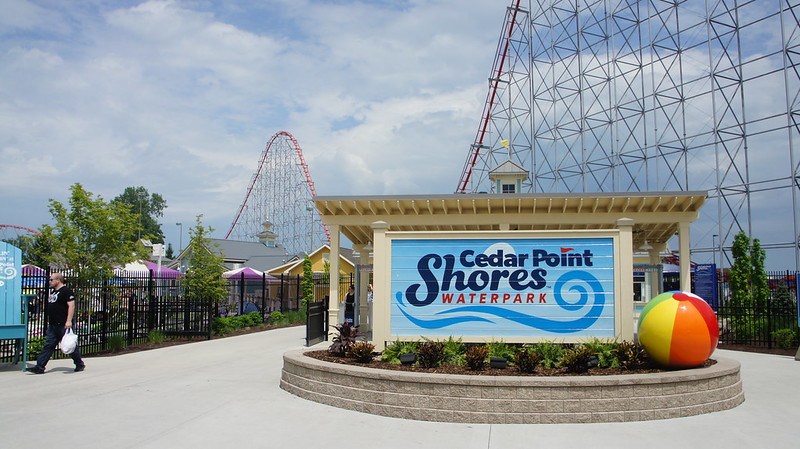 We decided to have lunch, and with Isaac having some food allergies, and Blake being in the mood for it, we decided to hit Panda Express.I can give or take Iron Dragon, but didn’t want Blake to miss out.

I wanted to see what the wait for Steel Vengeance would be like so our next stop was back in that corner of the park, but sadly the line was well over 2 hours.After changing into our swim trunks we headed over to some random slide complex and did a pink slide.

Isaac and I had wanted to do the drop slides, as we love them at Carowinds, but we passed for the moment and went to the big family raft slide.As the rain got heavier we decided to call it a day at the water park after about an hour and a half just as the bottom dropped out of the clouds.

We went into the bathhouse and changed while basically being stranded in their for around 30 minutes.I also had a cinnamon bun from Starbucks whilst drinking my Long Island Iced Tea.

The sun came out while we were hanging at Breakers so we headed down the boardwalk and entered the park by Windseeker, which I contest is still the best one of the group thus far.I like all of the nostalgia Cedar Point pictures in the restaurant.

A ride on the CP & LE railroad was our next stop.At this point it was only running the red side, but the ride was still super fun as always.

By this point it was a little past twilight and we headed to Magnum.But that’s…okay. 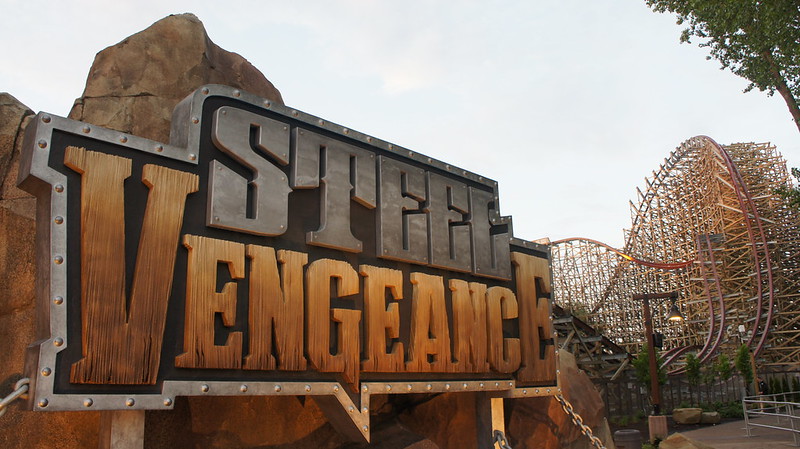 Blake still needed the mine train, but I needed a bathroom, so I told him to go ride that since I knew it would be a walk on while I went to the restroom, then we headed to Steel Vengeance to meet up.As we walked to the Magnum entrance to the park, I saw my first Dragster rollback.

My only main issues with the visit was that obviously they’re only running one train on Steel Vengeance, otherwise I’d have ridden a few more times as lines were light all weekend.I think I’ll likely skip next year, but I will definitely be back for more of America’s Roller Coast soon. We headed back to the AirBnB and we were all wiped out, so I fell asleep pretty soon after closing my eyes, ready for the drive the next morning to Kings Island.

I am taking my son at the end of this summer. Haven't been on a dedicated coaster trip since...well, Millenium Force was new? :) Steel Vengeance sounds and looks amazing. Thank you for your trip report.