CoasterBuzz was launched on January 30, 2000, and has since been visited millions of times by roller coaster enthusiasts from around the world. Here's a brief look at its evolution.

The launch, the first year

The site launched with a clear focus on four obvious areas: amusement parks, roller coasters, other sites and forums. These databases and community were augmented with news and rumors, which weren't initially a big focus for the site.

Three things caused the site to grow popular quickly. There was a "seed" audience that migrated from Cedar Point fan site Guide to The Point (now known as PointBuzz). Virtually everyone was building Web sites to pay tribute to roller coasters as well, and the site database was a quick way to share your site with thousands of other people. There was also cheap advertising available through a paid search engine called GoTo.com, which was eventually acquired by Yahoo, and that scaled up the visitor base quickly.

From a technical standpoint, it was also a trainwreck. It was built on the old ASP scripting technology, which was difficult to maintain.

Version 2, a year and a half later

CoasterBuzz was gradually updated to this new look over the course of 2001. During this time, the rumor section also went away, making the editorial decision that CoasterBuzz would be more about the news.

Later in the year, the site was dropped by an advertising representation firm that was compensating for the cost of hosting. At that time, it was costing about a grand a month to meet the demand of traffic, and with long-term contracts, quitting was not an option. That's when CoasterBuzz Club launched, on October 30, 2001. It not only saved the site, but ended up serving as a low-cost alternative to traditional roller coaster clubs, and has been operating ever since. In 2002, the first CoasterBuzz Club events were held, starting at Kings Island.

This version also introduced the track record, where users could keep track of the rides they had been on. The meeting calendar also started to accept entries.

Upgrades, a long haul for Version 3

On January 30, 2003, exactly three years after launching, the site was rebuilt again. Little had changed in terms of features, aside from a few forum feature updates.

The Rollercoaster Tycoon games were also very popular by this time, and a sister games site was launched as a place to upload, rate and download save game files. Thousands of files were uploaded, with tens of thousands of downloads.

The CoasterBuzz Podcast was also launched during this time, with the first episode posted on September 25, 2005. The show was recorded on a weekly or bi-weekly basis for many years after that.

September 1, 2008, after a very long period of time without updates, CoasterBuzz finally got a facelift and a complete rewrite. Everything about the site got faster. The site database was dropped, since so few people were creating and maintaining roller coaster sites. CoasterBuzz Games was also shut down, as the popularity of RCT declined after the horrific third installment of the game.

The new site was built with maintainability in mind, and after the launch, a number of features were added. Track records can now be sorted, and users can rate each ride. Entries from the amusement park database have bird's eye view maps. 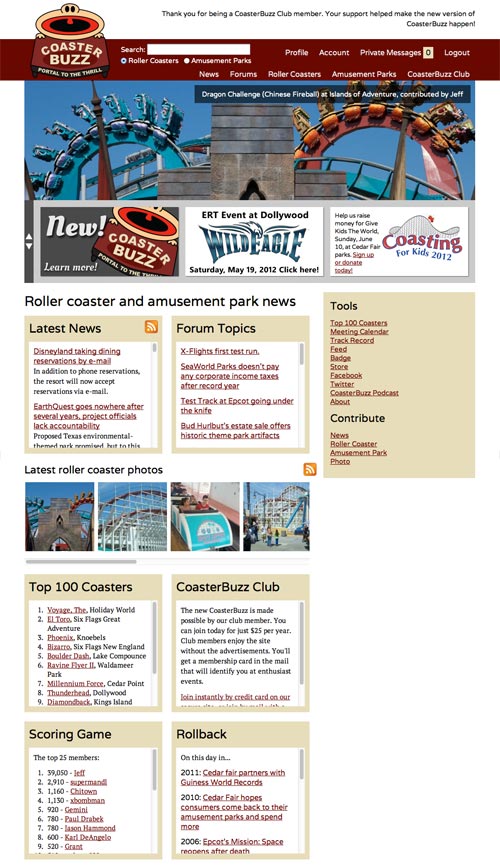 On April 13, 2012, this version brought a new home page where, at a glance, you could see the latest news, forum topics and photos. You could also see the current standings on the CoasterBuzz 100, CoasterBuzz Club news, the scoring game and the return of the Roller Coaster Rollback. The big forum changes included the ability to vote-up posts, infinite scroll thread loading, notifiers of new posts, as you were replying, and real-time updates all over the place. The scoring game is a feature of the forum, but members also get points for contributing news, photos and other content.

The design this time around was heavily influenced by the "metro" trend started by Windows Phone and later Windows 8, where there were fewer lines and decorative elements, and more flat, square elements showcasing the content. There was also a mobile version that was even more stripped down, and users could switch between the two. Most importantly, there was greater emphasis on photos, displayed bigger than before and featured all over the roller coaster database. This version was built to use the ASP.NET MVC framework on the server, and in 2014 it was moved to the Azure cloud service for hosting.

After more than 100,000,000 page views, the core of CoasterBuzz has always been its community of enthusiasts, volunteer moderators and amusement industry workers who come together here. Every entry in the amusement park and roller coaster databases, as well as every coaster photo, were contributed by visitors. With your help, CoasterBuzz will be the "portal to the thrill" for another 15 years. Thank you for being a part of this community!